In times gone by, we have often run a bath only to find it a strange muddy colour. This tends to make the aftertaste of early morning coffee a bit worrying, even though the water has obviously been boiled at least. The phenomenon is more dramatic when there has been a lot of rain, a situation far from rare in Brittany.
So it was with interest that we had bulletins from Darling daughter while we were on holiday, describing the slow and messy progress up our hill of municipal diggers. The water got darker and darker, but hope was there that one day all would be clean and shiny as our new pipes were laid. After weeks of having our cars covered in a thick film of mud/dust (depending on the weather), they finally made it to our drive way. They were as horrified as we were when we told them that our water meter was right next to the garage, so they would have to dig up the whole driveway to connect us to the new system. 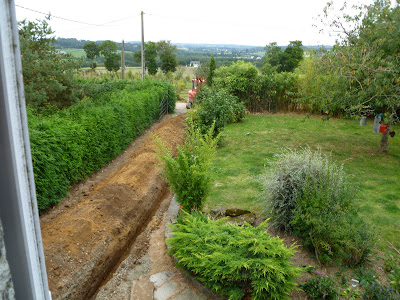 But it was exciting for those of us who are still a bit ill and lolling about in silk pajamas, and made a change from Poirot reruns. 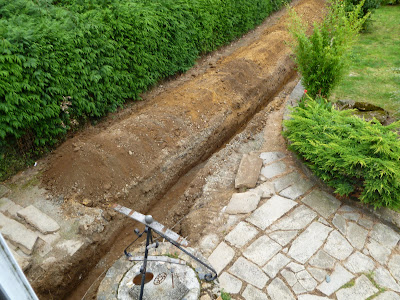 They made such large holes that they were forced to erect safety barriers. But some of us got confused about which side of the barrier was the safe one. 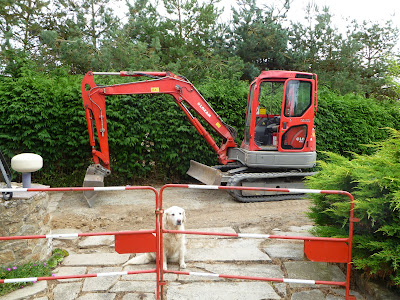 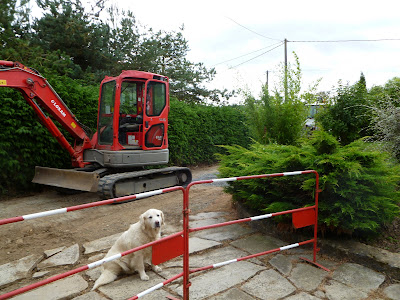 And when the someone didnt have enough brain to understand that it was possible to go across the lawn instead, they had to be rescued. 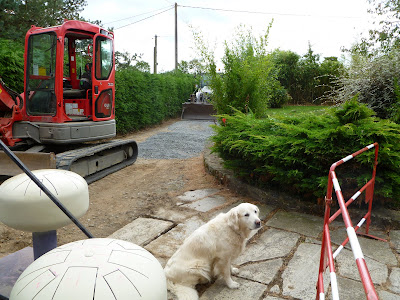 Of course, there were a lot of scary vehicles in the drive, so I can understand a certain reluctance to go the other way. But still there was the comforting presence of Kool drums drying in the damp air. 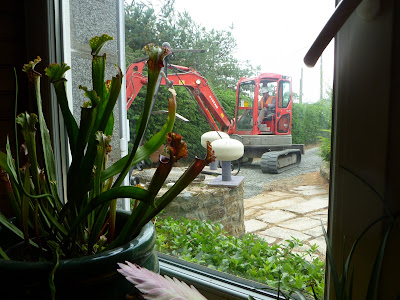 I (and my insect-eating plant) kept an eye on the workers through the window.
I did try to go back to work last week, but before I could even get near my autistic musicians, my liver started to get more and more uncomfortable. I received the results of tests through the post this Saturday but there was no doctor around to interpret them for me.
I unwisely had a look on internet to see what very high liver function test results mean.
It was a bit like when you have a spot and you look on the web only to discover you must surely have leprosy or elephantiaisis or etc... and will probably die in a matter of minutes.
Anyway, it seems as though there might be a few little bits of grit still in the system which are blocking things and so hey it is test time again next week!
OK, more silk pajamas and Poirot. Perhaps the workman will come and dig up something else.
Posted by Rosie at 12:40 PM

Poor dog, life with humans can be so confusing.

Water filter? At least for a short while, for the sake of the coffee?

I thought the drying cool drums were some new kind of gate post or garden ornament proclaiming the trade of the house's inhabitants...

Maybe it's all the impurities in the water which caused the kidney stones? (Just trying to fill you with baleful imaginings...) Hope you get things sorted out, would you like to borrow any DVD boxed sets?:~)

Z-We did discuss a water filter...but then that seems too much like admitting there is a problem. It's looking good and clear at the moment, any way.
L- thanks I might take you up on the complete Morse if this keeps on. Off to hossie tomorrow for an MRI scan where I will be injected with luminous paint and doubtless will glow in the dark.