There was a time when Mysweet would say to children “That’s enough! You have been on Facebook for at least 24 hours…It’s time to eat/sleep/do homework…”
He did have a Facebook account, but rarely used it
But now, all is changed. 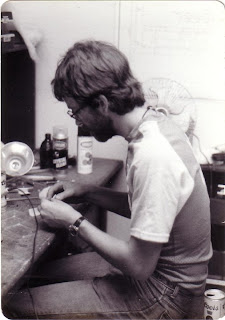 It is down to this photograph of him posted on my page by an old touring friend of his. This attracted the comment “A dam fine man! RIP!” by another of the ex touring sound engineer community. Feeling, with Mark Twain, that reports of his death had been exaggerated, he set to with a vengeance to remind everyone on the web that he is still drawing breath. I hear whirring noises from the office late into the night as he decides which photograph of the good old days he will be scanning and posting.
And now they are all at it. Sound and lighting engineers, and touring personnel generally.
Facebook is bulging with photos of strange hairy men from the 70’s with Ted Nugent, Foreigner, and doubtless more to come, mainly featuring sound equipment (it’s their thing after all) at massive festivals in  and elsewhere. At meal times the conversation is along the lines of “What was the name of the guy on the  tour in this photo?”
It seems that if you are not on Facebook these days people will think you are probably dead. The entertainment business is high risk, so I can see why…We both have friends who didn’t survive the pressure. But here we are! Still up and running!
I want to make the most of every minute.
Posted by Rosie at 9:46 PM