a not so little visitor 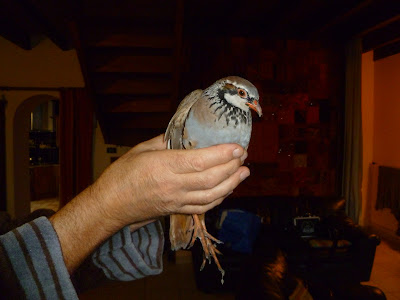 As Mysweet was in the garage, feeding the cats, he looked round and saw someone standing on the washing machine. Someone who must have been locked in there for a little while. Unfortunately, at the same moment, the cats saw it too.
But fortunately, they are mother and daughter and don't like each other very much.
So they embarked on a hissing and yowling competition, while Mysweet was able to rescue the visitor.
He came through to show me, and I terrified it as I tried to photograph it using strange settings on my camera like red eye elimination, by accident... 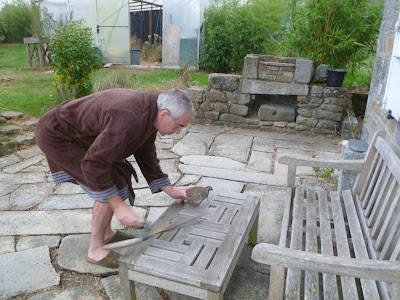 He took it outside and put it on the table that I make Porridge stand on when I brush her.
And it flew away very quickly indeed.
Mysweet thinks it might be a grouse, because he thinks he has seen it on a whisky bottle.
A very lovely man died a few days ago; Mysweet's wonderful older brother. He was 79 and he had cancer, and he had been just a couple of weeks in a hospice. He was saved lingering nastiness and a slow decline, and he was lucky enough to be surrounded by people who loved him. So it was a good end, but still.... it is never comfortable to be reminded of one's mortality is it?
We will be going over to the UK for his funeral, and we are looking forward to swapping stories about his very eventful life.
Porridge is not looking forward to a couple of nights in the boarding kennels, because we haven't told her yet. She didn't enjoy it much the last time...
Posted by Rosie at 9:07 PM

Troubles for everyone, but not as bad as could be.

My condolences on Yoursweet's brother. Even a good death is a loss to those left behind.

Yes, my condolences, to J especially, have a safe trip.

It's a partridge; they're fairly tame and it was probably taking refuge from the heroic chasseurs. Or perhaps it was trying to beat the Christmas rush and looking for a pear tree/