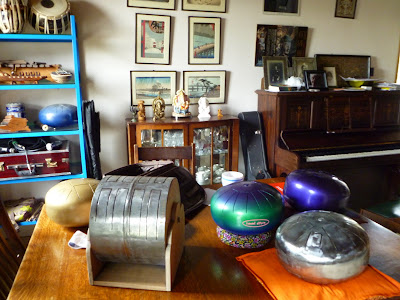 Mushrooms sprouting in the living room?
No, it is the Kooldrum collection after their outing to see the autistic musicians this morning.
The difficulty is finding somewhere to put them all at home.
They got such a good bashing that you probably heard them from where you are.
A trainée looked on in disbelief as we made noises like giants, fairies and bells.
The boy who just says oui said oui into a toy microphone, the boy who dribbles leaked a bit into the keyboards, and the girl who loves keys made up a story about going to a restaurant and having a pizza, and I sang it to her on the guitar. (She is the only musician capable of limited speech).
The usual Thursday morning then...
Posted by Rosie at 3:53 PM

Way kool! At least they're wipe-cleanable, in the case of dribbling...

Shiny things. I love them. I bet your musicians did too.