A visit to England and a farewell...

Having to travel to England for a sad reason, a family funeral, it was still possible to find some consolation. Our little family of four was travelling and spending quality time together for the first time since the teenagers had left home.
As is usual with teenagers, I got the impression that some of them hadn't eaten since we had last seen them... 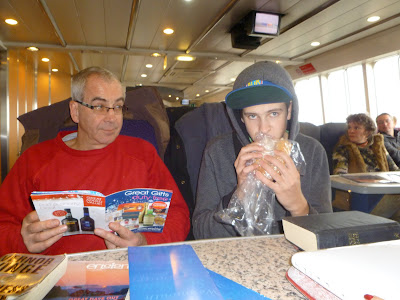 We went on a very fast boat which only took a couple of hours. 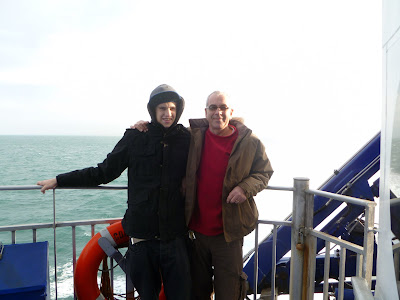 It only took a couple of hours because it jumps from the top of one wave to another rather like a show jumper at Hickstead. There were a lot of brown paper bags available for those with weak stomachs. 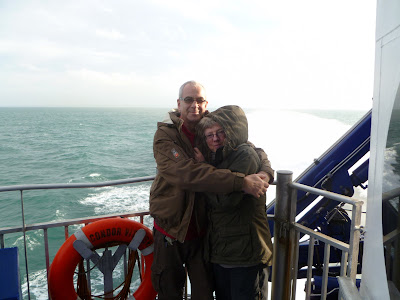 Here is Mysweet holding on tightly to stop me from being bounced off the back of the boat.
The ceremony was a christian one, and we are not christian.
The teenagers agreed to take part in the musical aspect of the service in spite of this and I was proud of the way that they were able to respect other people's beliefs even if they did not share them. 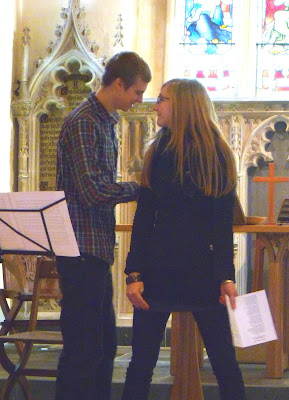 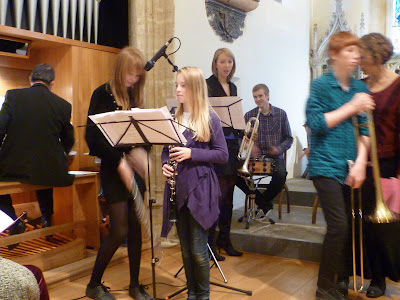 Of course, some of the musicians were very pretty...
There were some aspects of the service that we found difficult, (an evangelistic sermon), but it did have the effect of making me re-examine my own philosophy, and finding it not much changed after all these years: never be sure about anything, expect the worst, and hope for the best!
Posted by Rosie at 3:13 PM

Always good to take a good look at one's assumptions.

Nothing like a big warm hug on a fast boat.

Much as these ceremonies can be uncomfortable, there's comfort in being with family and friends at times like this. Too often it seems that we only gather at weddings and funerals, if far flung from each other. Lovely young people making music together is one of those memorable rewards from these gatherings.

Hi! I found your blog through Taste of Garlic and love it! Keep writing!

Funerals are important for many reasons, I think, and they matter for the living not for the dead. You must have been proud of the way your family joined in with good humor and affection despite differences in belief.

I, too, have trouble with evangelical sermons, but Zhoen is right, a reexamination of ones beliefs never hurts.

Z I am constantly taking them out and raking them over, usually at 4.30 in hte morning..
m-l It was nice to catch up with some people I hadnt seen for a long time
Lauren Hi to you.
20th- Yes the funeral was for everyone, and I suppose an evangelist cant stop themself, it is in their contract, it is what they do...compulsive!