when a Breton clown marries a German sound engineer......

...it is bound to be an international event. 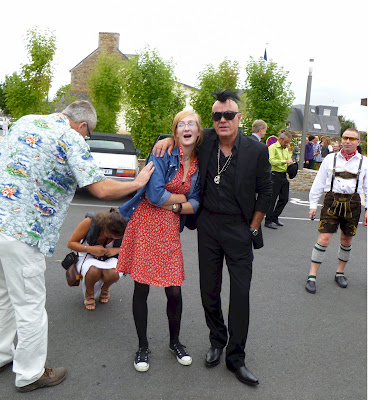 Here you can see Mysweet revealing his 10 years in California with his shirt choice, and Darling D is establishing diplomatic relations with a german punk, while a tyrolean looks on bemused in suede hot pants. The most impressive thing about that costume was the gap in his socks (summer version?). 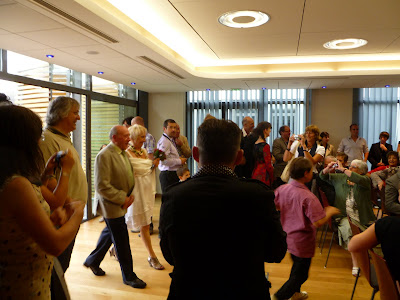 The bride arrived on the arm of her proud father, to the sound of John Lennon singing "love", which of course had us all sobbing almost immediately. I will use this as an excuse for the blurred quality of my photographs, although it was really because my intelligent camera was incapable of deciding that I really meant portrait even though the setting was scenery... 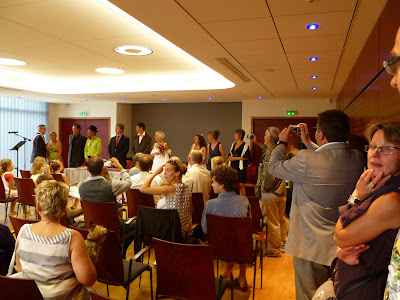 The mayor made a speech which was not as long as it might have been, and also had a few jokes in it... 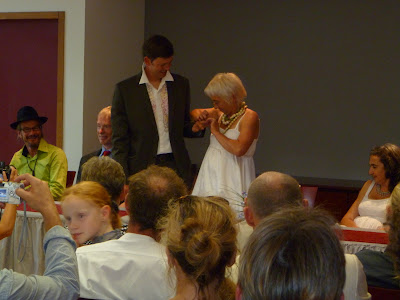 The vows were exchanged and then the young couple struggled to put rings on each other's fingers. They both looked lovely and very happy by the way, and it was all very moving. 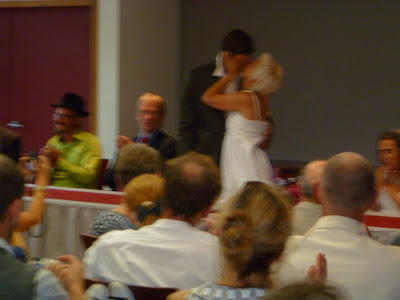 As you can see, my camera tactfully went out of focus at this point.
The simple ruse of leaving three microphones in a row switched on in a wedding tent full of performers had the effect of turning the wedding breakfast into a delightfully bizarre eurovision song contest with entries from Germany, Tunisia, Spain, Scotland, Italy, France generally and Brittany in particular, with us representing England as a trio, and then individually. If I have forgotten an entry, please forgive me, ( the champagne was good...). Particularly touching were the performances of the brides mother, then father, then children!
And what a joy to catch up with friends and aquaintances that I hadn't seen for ages.
Posted by Rosie at 12:03 PM

In a strange (and rather creepy) way, that first photo sort of sums up my 8 years of living in Brittany (although I've yet to spot a tyrolean in suede hot pants and rather weird socks!)

Certainly not what the Living in France handbooks suggested.

And where did you find the German Punk? I thought that they were quite rare in these parts (and certainly didn't come out in daylight?)

Keith, they were wedding guests who had travelled a long way to be there, of course.... from Germany.
Lesley, lady clowns are not unheard of...and this very talented one has performed with Archaos amongst others...

Looks all rather fun, though I think the lederhosen might well be the high point.

Looks like a fun wedding. People who get married should always have a party. And the party should have character. So the Clown and the Engineer did the it the right way.

I've just re-read my last comment. What on earth happened to my language skills? Was I drunk? Possibly. But I see I left the comment at 3.40 pm so I don't even have that excuse. Oh dear. Hope your patients are appreciative of your patience.