We have at last returned from an eventful holiday in the South of France at Limoux.
It involved meeting a nice new vet from Paris who looked about 12 years old, lots of worrying, licking of paws, enduring a smell like over-ripe camembert for hours on end in a small car, and trying to wash a large waterproof dog with deep treatment medical shampoo every two days under a weakly flowing tap.
At least Porridge developed three different illnesses at the same time which meant the vet was better value for money, although the dark look on Mysweet's face might have indicated that he felt otherwise.
It was so hot when we got down there that Porridge did a lot of swimming in rivers at first.
And we noticed the smell became riper, and riper.
Then, when we walked over a newly mown field of grass we didn't notice the sharp seeds that worked their way into her paws until she spent all night chewing her foot.
The vet increased the worry stakes when he cheerfully informed me that last year he had operated on a dog pierced by one of these evil seeds which had worked its way through the body to the heart of the animal. We must check her for them every day or they will inevitably pierce the skin... With that he introduced a spiky needle with a grabber on it deeply into her foot, between her toes, and pulled out an enormous spine.
Ah... the smell. It had started in Brittany, but was now eye wateringly pungent.
She's got yeasty pants, declared the vet. Her fur is so thick round her legs that it never dries when she goes swimming a lot, and yeasts start growing. He gave us the shampoo and said we must be sure that it penetrates completely to the skin surface.
Oh, and by the way, he said, she has a uterine infection.
We left laden with antibiotics.
As we left a small woman came through the door desperately hanging onto the horn of a large male goat which was putting up a bit of a fight. The vet's assisstant dangled from the other horn and they both eventually manoeuvred it into the now vacant consulting room.
I felt a bit better about things... 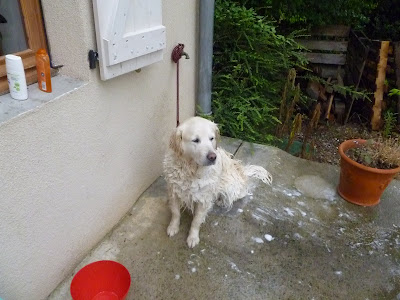 Love the bit about the large male goat!

I think I may be suffering from Yeast Pants myself!

By the way, did you know that if you search Google for Yeasty Pants, you blog comes out no1!

That should make for some interesting visitors?

Sympathy for YeastyPants from Sky.

But she does know about owners who walk her over prickles and are surprised when she's not too keen.

Keith I hope that wasnt the way you found me
Z it had amusing moments for me too...
Frank Thank you Sky. We will be joining you on the riverbank for a while

3 at the same time - lots of worrying - know the feeling.
Hope shes on the mend.

Poor Porridge. Spikey things in her paws, yeasty pants, uterine infections -- I hope she's being pampered and coddled. Sitting on the couch with some ice cream might do the trick.

Oh my god. Hope Porridge is thoroughly on the mend by now. I can absolutely see the goat (I am trying hard not to absolutely smell the dog) - I do miss your humour and your take on life, but, well, your kind of strong, sparkly words only happen when they will, I think - and are always a pleasure when they do.

Hi casdok...there is always something to worry about isnt there, it is the inevitable accompaniment to love...
Dingo the couch and ice cream sound fine...but I have gained 3 kilos as a result of having to stress drink lots of Rosé wine...so it's Mysweets tempeh only for now...
Jean thanks for dropping in. I love writing posts but I am finding myself more and more taken up with paid work...Oh well, we have to pay for the kids to go to university somehow!

She's as irrepressible as ever though, thank heavens.

Hopefully Porridege is feeling a bit better. Hope you have been enjoying your summer.