It has been an exciting couple of days here. We decided to walk to the nearest shops on Wednesday. We were running out of milk, and we get bad tempered in our house if we don't start the day with a milky coffee. Darling d came along because she gets bad tempered if she doesnt have enough sweeties.
We live at the top of a small hill, and the car can't quite manage it....
I am the one attached to Porridge with a knitted bee hive on my head made of Porridge hair. 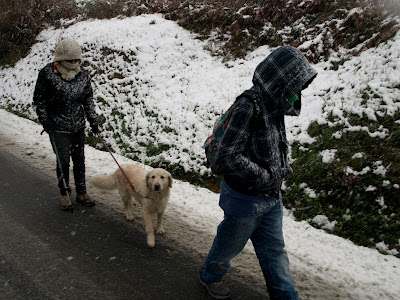 Mission was safely accomplished and we returned with the little that could be carried on foot.
We cancelled everything and got in more wood...and more wood.. and huddled round the wood stoves. I have to say that my feelings towards them have changed from outright hostility at the amount of attention they demand to a kind of mild affection, but I daresay that will pass with the snows.
Supplies were again getting rather low today, so we wondered if we should attempt the hill in the car. After all, we saw the tracks of our neighbours who didnt seem to have any difficulty. It was time for some panic buying. The skies were relatively clear, the roads salted (apart from our hill) and the snows were melting slightly in the afternoon "heat" of 1°C. 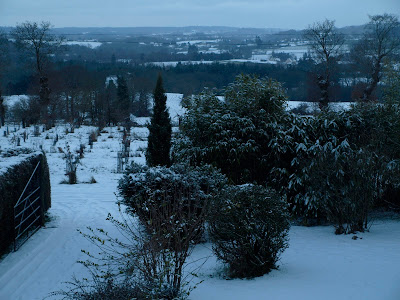 We arrived at the shops without incident and loaded up with everything one might need for several weeks isolation. When we emerged from the shops, a cloud resembling a Stephen King horror film set was blackening the sky. Five centimetres of snow fell in the short time it took for us to get back to our hill. We managed to get three quarters of the way up before the wheels started to spin and the car flailed from side to side. We were forced to abandon it and carry the shopping through the blizzard. Those tiny brave points of light in the gloom are the headlights. 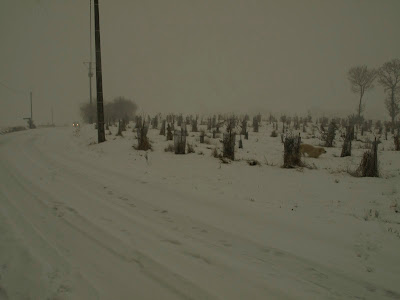 While we were at the shops, Darling d had stopped by to see a friend in the hope that we would pass by later and collect her. Mysweet decided to back down the hill, because the road is narrow with two big ditches either side of it. He thought that this might be the only chance to get Darling d before all of this stuff started to freeze. 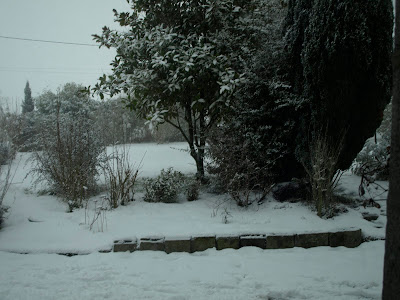 I called him to see whether he had arrived safely, and he told me he was hovering over a ditch at the bottom of the hill and was trying to dig away the ice. Of course Porridge and I raced down the hill to offer our assistance by way of supervising and making helpful remarks. 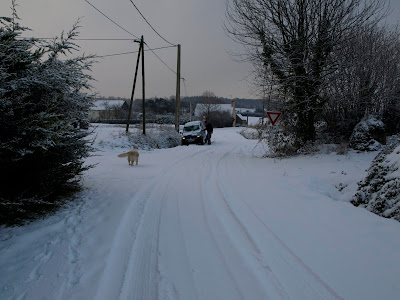 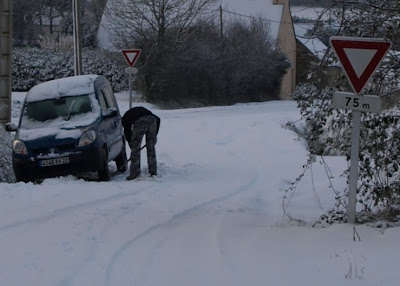 He managed to move the car to safety and we walked up the hill to our house. Darling d is still stuck in the town at the house of a young gentleman friend of hers. Now, how did she manage to organise that? 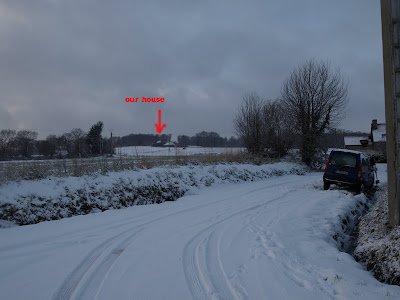 My darling D is here in the mushy northwest, cross because she is missing the biggest snow in 20 years in Oxford. She goes home next week to her narrow boat. I'm not sure whether your post will make her sorrier or gladder that she missed it. All of Europe seems to be in the clutches of a deep-freeze winter.

gosh a narrow boat! Does it have a wood stove?!

Why does something so pretty have to be such a hazard for travel?!

Our middle daughter and her two little girls are still with us here in Vancouver (no snow) while son-in-law is back in London, frequently reporting on the snow conditions. Mixed feelings here about going home to London, loving the prettiness but not the potential navigation difficulties! I haven't forgotten last winter here.

Keep warm and safe! If this goes on much longer, a horse and buggy might be in order for the grocery trips.

Love the dramatic photos and story - glad you made it back to (relative) warmth and safety!

My daughter is stuck on the golf course she live and works on and we were meant to be moving her this weekend, not a hope of it happening now. So she is stuck out there right next to the River Thames. She says it's beautiful out there but she is bored and missing company, I think her boyfriend is annoying her now as he is the only person she has seen in days.

Wow what a day you had getting out and about, i do hope you have all warmed up and that you have plenty of everything. I think we are all stuck with this for about a week to ten days, depending on who is telling you. You do live in a lovely place though. I guess you have to be ready for just about anything out there. Stay warm babe.
Much love
Lia
xx

Spoke to Mom in Paris today and there's snow on the ground and it's quite cold and she didn't even leave the house. If you ever get to Paris, you know you have to call her, right?

I'm sure you and Porridge were very, very helpful as Mysweet dug out the car. That's a lot of hard work supervising and making sure he's doing everything right. I hope he was appropriately thankful. Did you get a massage and foot rub when you got home? It's only fair.

Quite a saga, Rosie. It's difficult to imagine those verdant lanes through which we drove last summer under all that snow.

We're on a hill too and the snow's in abundance, but this corner of Hertfordshire seems to lie between two bands of extreme weather and our snow's only four or five inches deep. To east and west of us roads are blocked and villages are cut off.

marja-leena, we are thinking of running something up to harness the enrgy of Porridge.
amy- it aint over yet
lia there must be so many people stuck all over the place...I would love to know all of their stories...
Suzy, if I start walking now I might just get to Paris before Spring, whatever that is...
Dingo , our comments were so helpful that, as we walked away, not only did we forget to lock the car, but we left the back sliding door open facing the main road, with computer equipment in the back...and miracle of miracles, it was still there this morning, cos we live somewhere where strangers are rare even in the sunshine...
But can you get to the shops Dick, that is the important bit?

You must be further north than us - cold but mainly green here.

Our village shop has been barely surviving on very little local support. It serves us right that - just before the snow - the lady running it had finally decided to throw in the towel.

Oh goodness! Making me feel less bad about wimping out of stuff.

You've got to get the harness thing and the barrel of brandy round her neck sorted out for Porridge!

Spoke to my Mum today and she said that she had braved the roads on Friday to get the basics for the next village but had to another town to get bread as all the bakery had was baguettes.

Her neighbour who she get fresh milk from has told her not walk to the barn until the weather has cleared up- she will bring it along. Thank goodness because just last year she managed to break her wrist badly slipping on ice on her patio.

With my Dad being almost 74 and Mum 71, its a worrying time when the weather is bad and you know they are so isolated in the middle of nowhere.