when I didnt die after all but it was a close one..or two

We will gloss over that Friday night.
It rained and it rained and, well you know... it rained.
I thought about how far away help was, and decided that I would have to die of food poisoning or recover quickly, there was no middle route, and I thought evil thoughts about the owners of the supermarket.
On Saturday morning, Mysweet suggested a little stroll down the valley. It was still raining steadily.
The owner of the gite strongly suggested that we keep to the roads because of all the rain. Every pathway had turned into a torrent and the fallen leaves were very slippery.
But of course we didn't.

On our gravestones will be inscibed the words
"absolutely incapable of following the road or even the well trodden path".
We thought it would be a shortcut.
But slowly the forest path petered out, and between the trees we thought we could see a lake far below us.
But it wasn’t a lake. It was cloud.
So, did we retrace our steps up the steep mountainside? Of course not.
We slithered and slid down the slippery layers of leaves, deafened by the sound of running water, boots filling up with the endless rain.
An hour later, safe in the valley below, we looked back up to where we had come from. A narrow steep gulley in between two sheer rock faces.
We decided to walk back along the road, however long it might be, and crossed the overflowing river on a tiny bridge for a comforting whisky in a deserted bar before the hike back home. 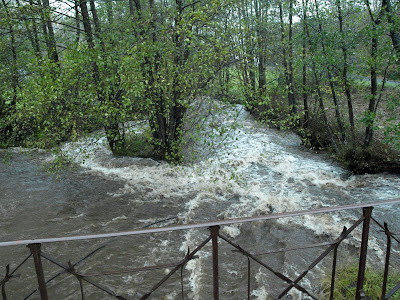 Wet traumatised woman with a dog that had tried to commit suicide by running towards steep rock faces at 40 mph before sliding to a halt centimeteres before the edge: 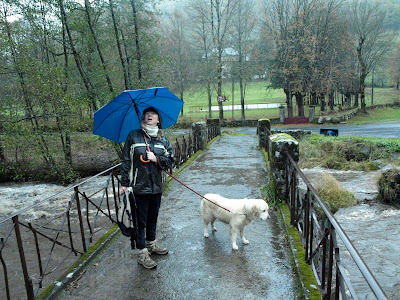 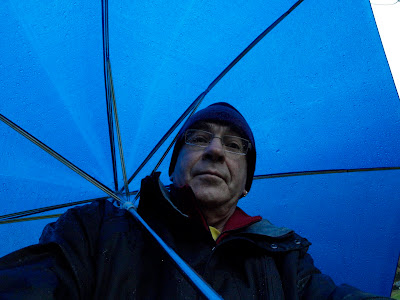 All Saints day is a holiday in France. There are special church services and all pay their respects to the dead. It is a family time, when grannies are taken out to dinner, and graves are weeded.
The solitary bar tender bemoaned the fact that her bar was empty because there was no priest available to take the service in the tiny village. (Usually the men of the neighbourhood await their wives in the bar while the service is taking place.)
All the road signs had been sprayed over with paint by local farmers to protest about the prices that they were getting for their produce. It costs them 7 euros to produce a sheep that sells for 5 euros. It sounds as though there is a supermarket somewhere doing rather well, going by the price we paid for our lamb chops. Perhaps the same one that gave me food poisoning.
So I presumed the locals were off obliterating the few remaining road signs. It was hard to understand what they thought this would achieve, except a few lost tourists…
In the village, the chateau was for sale for the third time in two years. We wondered whether to go and have a look, but didn't want to raise false hopes with our accents. (The previous owners had all been English). 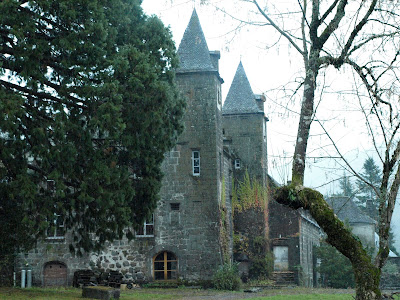 On Sunday morning the rain was still coming down hard. It had not stopped for 48 hours. It was starting to feel like water torture with that relentless pounding on the velux windows.
We drove to the town of Aurilliac to an antiques fair, which had the merit of being undercover in a dimly lit gymnasium. It was full of professionals whose eyes lit up when they heard our English voices. A man with an almost incomprehensible Marseilles accent tried to sell me a badly broken child’s violin for 150 euros.
We stopped for lunch in a pretty hotel in Mandailles in the Jordanne valley and ate civet de biche and truffade (deer with cheesy potatoes) with a lovely local wine full of tannin that coated our teeth like spinach does.
We drove back across mountains and passes with horrifying drops into chasms…and then without warning, the rain stopped. 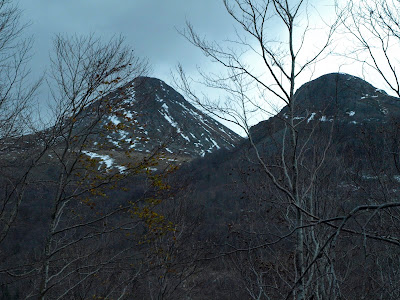 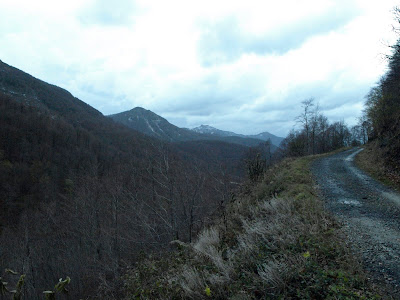 And then the wind started... 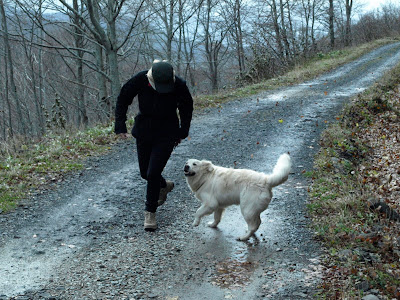 We walked along a mountain pathway accompanied by ringing cowbells and roaring water falls and were happy. 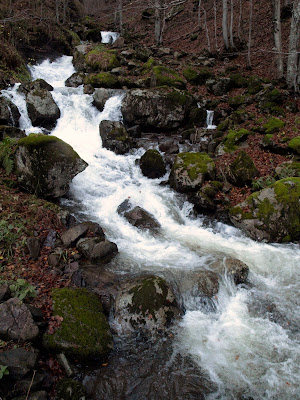 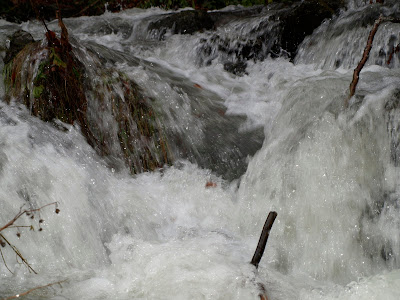 The moment that we got back in the car, the rain started again.
By Sunday night, the whole region was on red alert for flooding. The river Rhone was about to burst its banks.

Ah, the one memory that will remain with me is of the rain in Brittany...

Oh gosh. And the scenery and the gite look so beguiling.

Oh well, at least the ticks must have all got washed away...

What an exciting time you had!

Sorry about the food poisoning. Even in the rain, the scenery looks gorgeous.