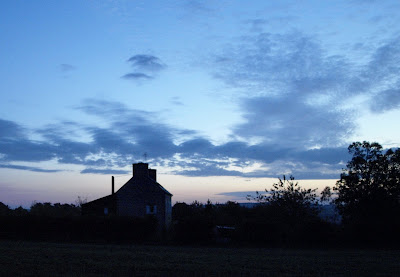 It is dawn on Sunday morning, and I could have a lie in in my nice warm bed. So what do I do? I drag a reluctant Porridge away from her nice smelly mat on the living room floor. 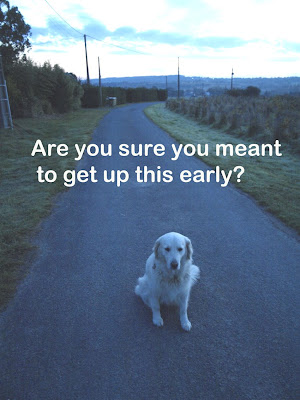 Yes I am off to join the misogynists on a cliff top nearby, and put Porridge through her sporty paces ready for a competition looming at the end of November. Bad tempered Breton men in flat caps, fiendishly good with dogs, but less so with people will be shouting at me and other middle aged ladies and telling us what crap we are at it. Many have been called and few have been chosen (or at least been robust enough to deal with it). I think it must be the masochist in me....
This week I watched another new recruit suffer the horrors of trying to trace out a track in a field, full of right angles, acute angles, points chauds (hot points where the scent is strongest), to drop an object at the end of the track for the dog to go and find on its own. Her legs were bleeding from nettles and scratches, and she was a little upset by the time they had finished with her, but I hope she will be back. It is fun... no...really...

It is just hard to explain quite why!

I will not be going next week though.

It is my wedding anniversary.

Yep... we do argue. That is probably why we are still together. I call it a frank exchange of views...

Any suggestions as to what we should do to celebrate? That dont involve cliff tops.
I fancy a romantic meal myself, but I am open to all ideas.
Posted by Rosie at 12:06 PM

Oh wow, that sounds like hard work, especially at that hour - who on earth chose to do it then!! Porridge looks like a champion though, I'm sure it'll all pay off! How exciting it's your anniversary - definitely a lovely dinner somewhere, maybe even a bit of role playing of recreating the moment you met?!

ooo yes I like the role play idea...I might have trouble getting into the same clothes though!

Aww, you sound like Jack & Vera Duckworth. Maybe a trip to Blackpool?

You'd think they'd figure out to treat you exactly how they treat the dogs - since that is an effective method of communication.


Fun is being with the people you love, the what doing is never as important as that.

You're right, though. Couples who "fight fair" do just as well as couples who never fight, it's the respect and connection that counts, not the style.

ms mac blackpool would be great but it is a bit too far away(and in another country)
zhoen, they treat us exactly like the dogs...there is a strict heirarchy and we are encouraged to make mistakes so that we can learn in the correction of them (and humans dont like making mistakes either!)

I missed the anniversary sentence and skimmed ahead to the 19 years of arguments. I thought you were still talking about the dog!
I thought "bitch she's putting a 19 year old lab thru all that abuse!"

Well, you've lasted a bit longer than Madge and Guy then!

We've both been in the business for nineteen years. Happy Anniversary.

What about a thalassothérapie day together?

Whose legs were bleeding? The dogs? The owner? A bit confused here.

As for the wedding anniversary...congrats! Fighting fair and airing differences is just as important as the grins and giggles. No matter how you celebrate, contrats!

Happy anniversary, Rosie. And may the free, frank and open exchanges of views continue!

dingo, of course it was the owner who suffered, not the dog.

We have just looked on the calender and discovered that it is not next Sunday, but the one after! This is the first time that we are going to celebrate it in 19 years, so we werent sure of the date!

thanks for all your ideas now we have a bit longer to decide!

A romantic meal would be my choice too. Just don't end up flinging the mashed potatoes at each other. :-)

I think the worst thing that can happen in a marriage is silence. It sounds as if you have a great marriage. Happy Anniversary!

whatever you do, you'd better include Porridge.

Porridge looks kinda sad or maybe tired. You could go to a good romantic movie and dinner afterwards.