Let us go back 19 years to a sunny morning in Barbados.

The happy couple wake up in their isolated beach hut. It is the day of their wedding.
There is no glass in the windows, only shutters for protection. Outside is jungle… full of things that make quite a lot of noise at night time when they are not sharpening up their biting mouthparts.

Yes, we are on the romantic wild east side of the island where enormous waves crash in from the Atlantic, far from the air-conditioned cosseted and expensive tourist paradise on the west side by the sheltered Caribbean ocean. But more about those waves later… 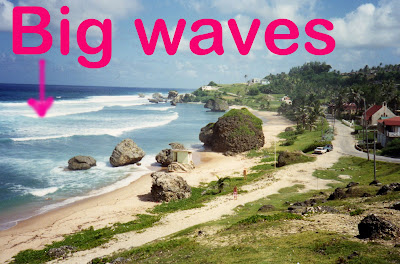 The two bridesmaids, who have left their fancy hotel to come and witness the ceremony, also awake in their unpretentious chamber. 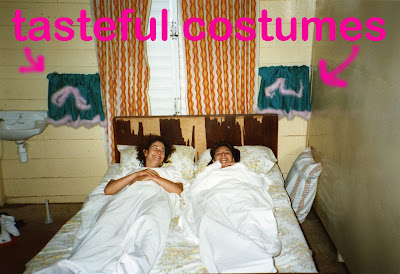 We all wonder what we will find in the kitchen…

The day before, our girly guests had been horrified by the size and number of cockroaches scuttling at a lazy pace around the hut. They insisted that we bomb the place with insecticide before they would rest their heads on any of our pillows.

This was not helped by my telling them a tale of a tramp found dead in New York, suffocated by cockroaches congregating in his throat, attracted by the sweet smell of rum… and rum was rather popular with us all.
Before their arrival, I had wondered whether to grease the legs of our bedstead to discourage climbers, until I noticed that they have very effective wings…
I also wondered how to practice snoring with my mouth closed.

The bomb was administered, and we went out for the evening. When we returned, a little tired as a result of rum, a quick glimpse in the kitchen revealed the satisfactory sight of several thousand ex cockroaches.

In the morning, the kitchen floor is a seething mass of ants, carrying off the unexpected bounty of several thousand cockroaches. We realise that the jungle has an infinite supply of anything we might want to get rid of, have a quick glass of orange juice and open the first bottle of champagne of the day.
(I think it was pink). 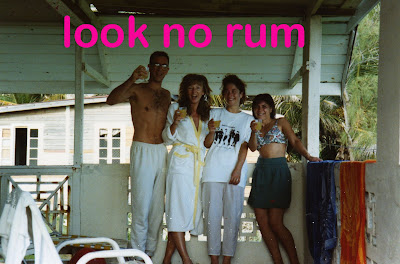 Bridesmaids and husband-to-be go off to the nearby orchid farm and also collect wild flowers.

We set about dressing for our appearance in court. At that time, in Barbados, marriages could only take place in a church, and no civil ceremony existed…except before a judge in a court.

The court is a little room under the police station, which is a little white building in the middle of a field of sugar cane. 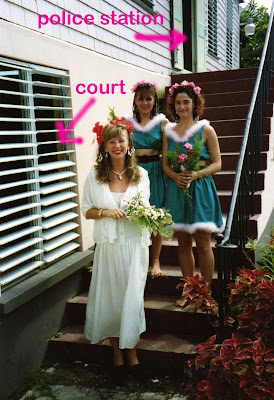 The bridesmaids have put considerable thought and effort into their costumes…but their bare feet are not appreciated in the court room.

Judge Theodore Walcott asks the court to be upstanding after he sentences a breadfruit thief to a short prison stay, and we exchange our vows. 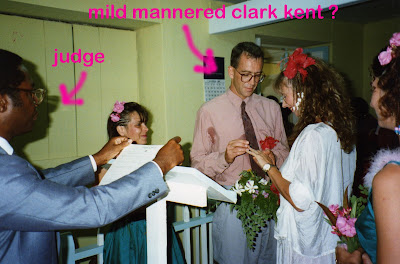 We take our places for the traditional photo session outside the courthouse door... 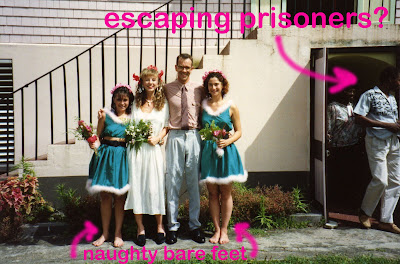 We return to our happy hut to celebrate in our own ways.

Some of us dance: 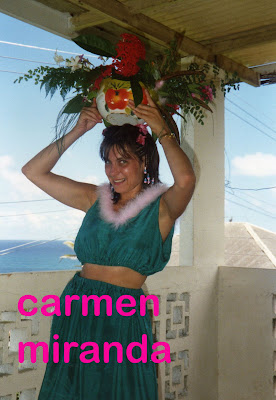 Some of us become reflective: 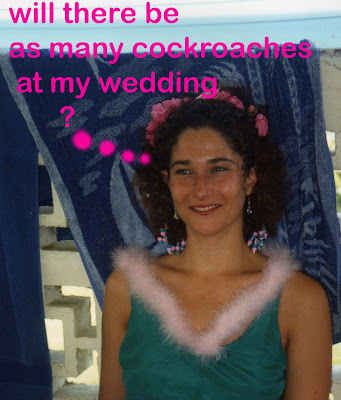 The wedding breakfast takes place in a colonial style guest house and restaurant owned by a German gentleman, who sounded charming on the phone. As we arrive we are shown to our table by a man wearing high black leather boots and jodhpurs and a pronounced German accent. We wonder whether he got lost on his way to Brazil. I am too scared to take a photo of him.

More champagne and rum are consumed and when we finally leave, we decide to spend the remainder of the afternoon on the beach.

I sit and laugh with my bridesmaids as my new husband goes off for a swim in those lovely, enormous Atlantic waves.

He is gone for about an hour…

But we do not notice the time pass…

Eventually, he staggers up the beach, finally having beaten the terrific undertow by bodysurfing. He is pale green.

We are obliged to adjourn to the hut to administer a restorative…
Posted by Rosie at 11:29 AM

Glad he was able to swim back...

But why do you have elves for bridesmaids?

Phew! Thank god you married mild mannered Clark Kent! Did he stagger up the beach wearing his Superman costume or had he changed back to his alter ego?

I do love the elf bridesmaids.

One of them, Carmen Miranda, is named after my dog. That is cute.

What the HELL were your bridesmaids WEARING?! I mean, I know it's often the custom to make the bridesmaids look ridiculous so that the bride seems that much more lovely, but REALLY?! Feathers?!

You, my dear, are an hysterically funny woman.

What a sweet innocent uncorrupted young man he was then...

by the way, the elves insisted on designing their own outfits and I had no say in the matter...


this was before he became slugman...

OMG! how terrifying, my god, getting trapped out behind the waves by undertow is my worst nightmare- he really must be superman to have got back in! And thank heavens for that, or you wouldn't be celebrating 19 years later!

The costumes are great!

Oh hubby, hubby, you went for a swim after champagne and rum? I'm sure your uptight judge would've had something to say about that!

How very "A Star Is Born" (the Judy Garland/James Mason version) - but thankfully he came back!

Love the photos, setting, judge, clothes and captions too.

thanks for your comments all..it was a day to remember

When I grow up, I want to have a wedding day just like that (well, maybe minus the undertow).