The Power of Testosterone

Darling D and I came down to the living room and discovered 10 young men in a state of undress. They were removing trendy clothes (they are, most of them, in rock goups and have an image to maintain) and changing into tatty stuff. We looked about ourselves in appreciation and inhaled the pheromones.

They charged out of the front door and disappeared.

We heard wild cries punctuated by gunfire from the small patch of forest at the corner of the estate belonging to the Chateau.
And then they returned: 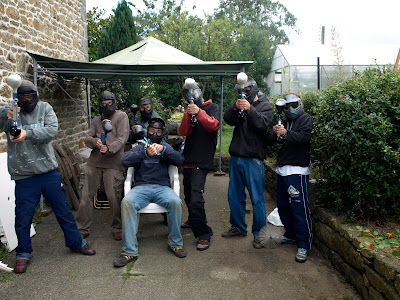 Yes, it was a paintball battle and some were severely wounded, or, at least, were splattered with a bit of paint.

I thought no more of it until I went to collect the tomatoes from the nearby greenhouse and found that they had been strangely affected by the proximity of testosterone... 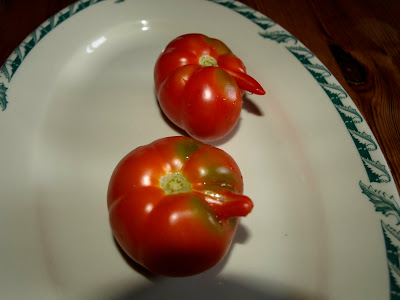 Surely it cannot be coincidence...

Oh my! Imagine what would happen to cucumbers!

Oooh, this is the second time this week I've seen a tomato woth a willy. Is there something in the water, I wonder?

The only shape our tomatoes are round except once it was shaped like a heart.

I dont know what has happened to the rest of the greenhouse, I have been to frightened to go in there...

Excellent. Thought of something v naughty to say, but then realised it probably wasn't for sharing. TTx

Who has seen the wind?

Neither I nor you;

But when the leaves hang trembling,

The wind is passing through.

Who has seen the wind?

Neither you nor I;
But when the trees bow down their heads,

The wind is passing by.