When I lived in London, I was a great fan of Indonisian food. So it was with delight that we accepted an invitation from some friends to take a day off from our internet toiling and visit St Malo for lunch at a Javanese restauraunt. Our friends are French but unusually adventurous when it comes to spices...
At this time of year, the medieval town of St Malo is full of tourists from just about everywhere, and they were very entertaining in themselves, but perhaps would be less so if I lived there and had to fight my way through them on a daily basis!
The restaurant, which was hidden away in the narrow winding streets and off the beaten track, was completely empty. It is run as an addition to a small hotel by a married couple, a Frenchman married to a Javanese chef. We were told by our friends that the meal would be explained to us in minute detail, which could have been very tedious. But no! It was charming.
The whole culture of how javanese food is prepared and eaten was delightfully described by our maitre d while I attacked a large rum punch and agonised over menu choices. His wife hovered in the nearby kitchen and then the sound and smell of woks and friers got going. 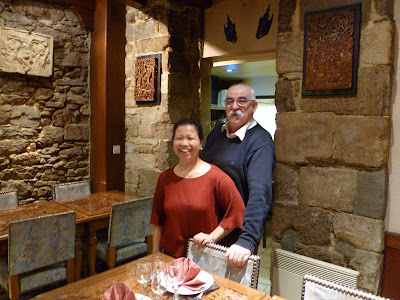 I chose gado gado as my starter and he said that this meant a mixture and was a good description of their children. The sauces were delicately spiced and my chicken curry with 10 spices was subtle and delicious. Everything was authentically made and it was more like being invited to someone's house than a retaurant. Chili sauces were available to up the endorphins for those of us that way inclined. Here is some of the spread: 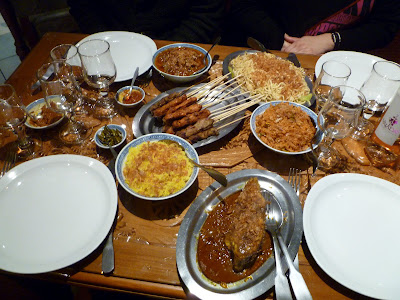 And these are the happy faces of the diners. 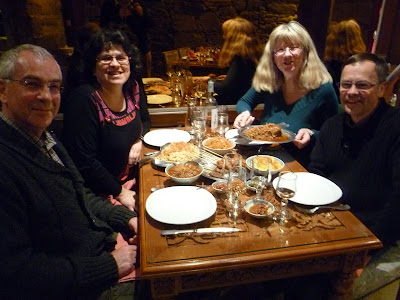 So I am tortured by indecision. Should I tell everyone about this wonderful place and then find it full up next time we go? Or share the secret with you? Don't tell anyone will you!!!
Posted by Rosie at 7:56 PM

If I thought I could ever make it there... well, you know.

Delightful to find such a place, such people.

I REALLY want some of that!

Tell the world, that way just about enough people here who don't believe that spices are the devil's work might just go and keep it from being closed down when next you go. I shall find an excuse to get to St M and get the address off you...