Hot news from the drum face 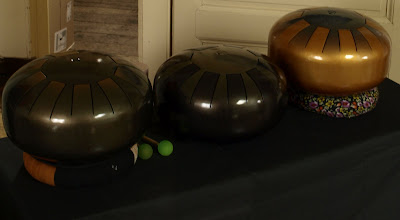 The new kool drum prototypes waited patiently in the wings and large numbers of arty people, lots of the men wearing red scarves for some reason, accumulated downstairs wolfing down free arts council buns. Is there something I don't know about red scarves? We played in a hallway at the top of a stairwell, which gave us some space, but meant that every now and then there was a bit too much arty laughter coming up the stairs during our performances. 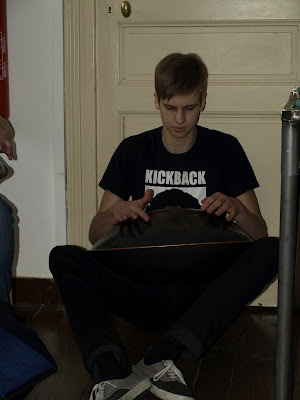 Drummerboy had a new expensive hairdo. Those of us in the household who have very thick hair have to spend a lot on it to avoid looking like playmobile men and women. His seems to have been more effective than mine.
We had little groups of people brought to us in batches and we played music at them in a short burst again .... and again...and again, to the point that I have forgotten how many times.
This was rather a nice way to do a first concert. By the end of the day, the worried expression on my face in the photo below, where I am trying to remember which note is which and in what order they come, had become a relaxed grin.
We finished the afternoon with an aperitif, and toasted the men in red scarves. There was mutual back slapping, the very nice men in scarves gave us a large container full of left over buns (which were also very nice indeed) and off we went with a feeling of "job well done" and expensive hairdos merited.. 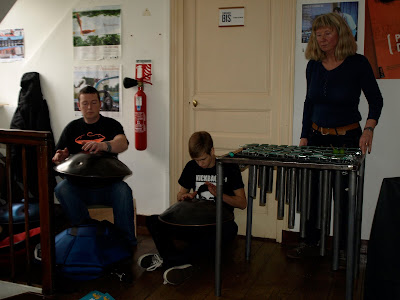 There used to be a thing about 'red hat no knickers' didn't there? Perhaps with arty French men it's 'red scarf no y-fronts'...

Glad it went so well, it really is a terrific sound. I knew about your voice and I knew about kooldrums but the combination is a match made isn't it?

Lucy how sweet of you to say so...

by the way, in my family the expression was "all fur coat and no knickers", spoken with a northern accent. I always supposed that it meant lots of fuss about nothing much.