The Physalis Harvest is in...again

Mysweet came in from the garden with arms full of these little sweeties, which were a bit damp, (as was he...) All of them took up positions around the fire to dry out. 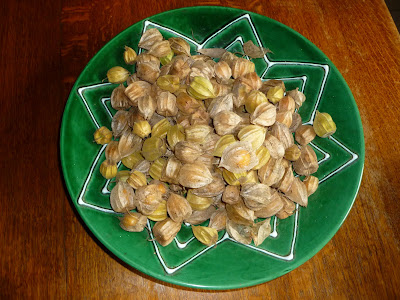 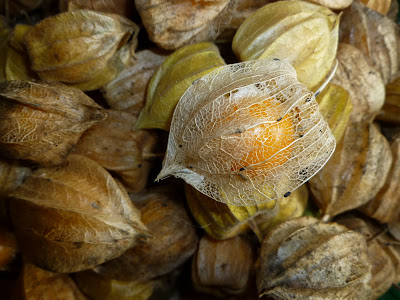 The physalis harvest is usually well over by now, but he found this lot lying on the ground. They are conveniently protected by little Porridge proof (and insect proof) lacey containers, which are rather beautiful. I adore them with cereal. They explode in the mouth like fragrant vitamin C bombs.
We had a registered letter addressed to Mysweet lately, which contained surprising, and bad, news. He was informed that he had lost his last points on his driving licence. He told me that it was because he was photographed by a police camera at the hospital gates racing to visit me in hospital, and crossing a light just as it turned from orange to red. So it is kind of my fault?
I did feel for him, because it is hard to find out how many points you have on your licence without going to the prefecture and getting a special code to look it up on internet. When you drive as many kilometres as we do, it is inevitable that you get snapped every now and again.
After three years you get your points back again. He is not allowed to drive for six months and has to pass an exam about the highway code.
I have to say that he is taking it very well. He has bought himself an ancient black moped and is embracing the life of a retired pappy. He threatens to start smoking gaulois and to hang onions off his handlebars.
Of course, being the only licence holder in the house, I have been driving at a funereal pace for the last week, strictly adhering to the speed limit and taking great pleasure in annoying french drivers stuck behind me. I thought that I had better check out my points at the prefecture as soon as possible to be sure of my situation.
I came back home this afternoon trying to suppress a very smug smile. "Darling, I still have all my twelve points!"
Posted by Rosie at 6:19 PM

It seems to me that - if you are referring to the hospital in St. Brieuc (Yves le Foll)- those lights are specially configured so that it is impossible to stop in time if they are anywhere close to being about to change. Yoursweet(?) isn't the only person to fall foul of those particular lights, as we know.

Yep, I got nicked there too. It's four points so you can't do it too often even starting from twelve. I get twitchy every time I go through there now, I even stopped on green there the other day because I thought there was no way I was going to get through on time, it had been green for so long.

Your physalis are gorgeous - you're doing jolly nice things with your camera these days. They're full of vitamin C too.