Somewhere under the rainbow

A couple of weeks ago we went to the Chaos, my favourite river, to do some publicity shots for a new project- Singing Steel. While we posed in the late Autumn sunshine, Porridge took advantage of the water ( you can see her swimming if you click on the photo). 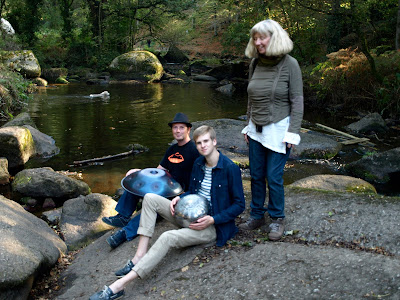 But while my back was turned she managed a sneaky beauty treatment and became...
mmm a GOTH? 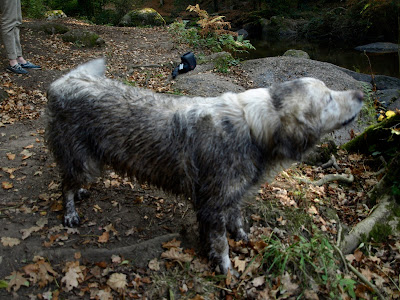 I think that we will probably end up using this photo, although I am not so keen on the way I am dwarfed by Drummer boy. Don't you like the way he uses his sick and elderly mother as a leaning post too? 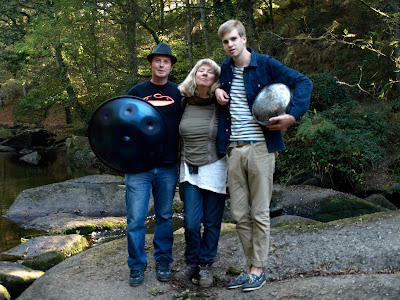 The weather has been strange today, with big black clouds dropping rain on us while out walking, but at the same time the winter sun shining low in the sky. It was very beautiful in the dramatic but depressing sort of way that Brittany specialises in.
I came out of the forest by the chateau with a very soggy doggy, and looked across at our little house. It was exactly in the middle of an enormous rainbow, which touched the ground on either side of it in adjoining fields. I don't know why this lifted my mood, but it certainly did.
Maybe it was the thought of finishing PD James wonderful new sequel to Pride and Prejudice, Death comes to Pemberley.....
Posted by Rosie at 6:16 PM

Odd weather seems the order of the season all over.

I think the picture is good. I could use one of those rainbows just about now.

there's a coincidence, I have a drummer son who also uses me as a walking stick....

Z Porridge was preparing her costume in advance, of course.
Anne hope the sun comes out for you.
Mouse- does he tap on every surface all the time like drummer boy?

Rosie, oh yes, he is constantly drumming with feet and hands on whatever surface he is in contact with. That's the beauty of being a drummer, he can drum anywhere though it helps to actually have the drums!