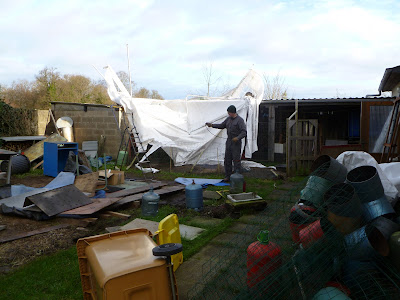 When the wind puffed away Mysweets Kooldrum workshop, he surveyed the damage and got out his tape measure. The chicken house would have to go. It would be recycled into a new improved, and rather more solid workshop.
Favours were called in. 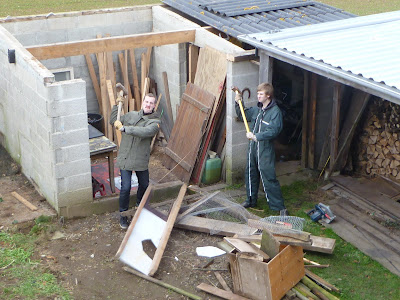 Children and their muscly chums were lured round with promises of spaghetti bolognese.
Quite a lot of adolescent masculine posturing went on as they worked up the courage to smash things with big hammers. 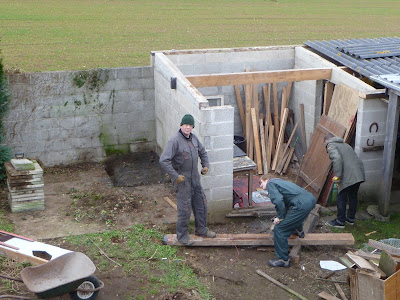 Sometimes there was even some adult posturing... I expect it is to do with territorial rights. 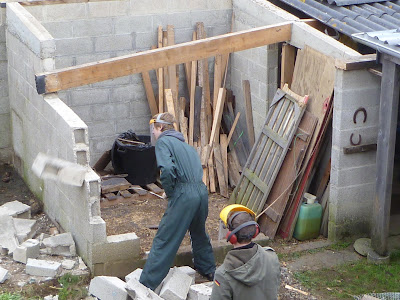 Breezeblocks were bashed out of the wall, concrete was poured for the floor, and straw was put down between the concrete and the wooden floorboards for insulation. 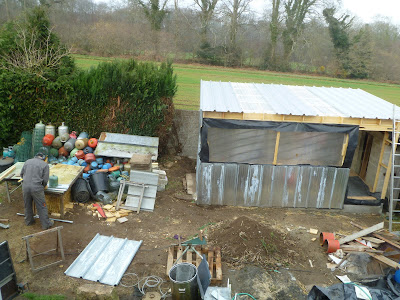 It looks like this at the moment.
I am told that it is going to be much prettier when it is finished.
I'll let you know...
Posted by Rosie at 2:57 PM

It's coming along nicely, Gillian! Much better than in the photos from your last post.

The guys posturing? Oh Yeah. My mom always said my dad couldn't do anything around the house unless she was there to "admire" his doing it!

Good luck with the finishing part...it'll be great.

you'll already be running up some curtains for him then ?

Those are very useful teenagers. And I thought that would be an oxymoron.

Z...it does! and work on grinding has already started inside it...
P...mysweet used to build wooden frame houses in america so he is in his comfort zone
J...finishing things is not our strong point, but we are good at starting things.
T...I was tempted because it was really rather nice and light inside. But now it is covered in its first layer of fine gray metal dust and is less like a verandah.
A...teenagers can be tamed if lured with food and controlled with the principles of behavioural science